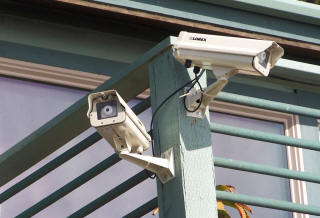 Public mages from these cameras are web-based. Each camera takes a snapshot on a predetermined schedule and uploads that image to one of our servers, making it available to the world without compromising the security of your local network or overloading the connection with your ISP for image demands. Alternatively you can keep the entire system private or have password-protected access.

There is no need for an on-site computer or server because the software inside each camera does all of the work. The camera's only requirements are electrical power and Internet access, and both are provided through a single Ethernet cable up to 300 feet long. That camera cable connects directly to a switch or router connected to the local network.

Some of our cameras are able to store images or video inside the camera for later retrieval over the Internet. They will even email you (with pictures) when certain conditions are met.

No Internet? No power? Not a problem. A pole in the middle of a field or even a location on top of a mountain could work as a stand-alone installation using a wireless ISP or cell tower and a battery/solar panel power supply.

Each camera can be adjusted to its unique vantage point, and multiple cameras ensure 360° coverage. Want something more exotic? We do that, too.

How secure is this? How do people get the pictures from our cameras?

They don't. The images come from one of our web servers. Each camera take a snapshot on its predetermined schedule and then uploads that image to the server where it is made available to the world. Those web servers respond to the image requests so as not to impact your bandwidth, and they are capable of serving up images to thousands of viewers at once. Images show up in the viewer's browser 30 seconds after they are taken.

What kind of equipment will be connected to our network and why is this necessary? 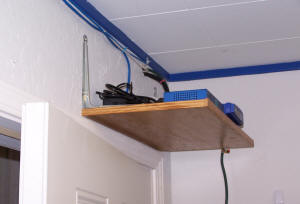 We place the cam network gear out of your way, yet accessible. This over-the-door shelf holds a router and a PoE switch which powers the cameras.

We would like to be able to communicate with the cameras to monitor their performance, track the bandwidth and make changes in their settings. We could simply open the camera ports in your primary router, but that could be a security issue on a sensitive network and we much prefer the cameras to live in their own little segmented subnet.

Typically the camera network equipment includes a router with custom firmware and a PoE switch which powers the cameras. These are set up on a separate address of your network and behind your primary router, to ensure that your network traffic remains private. This is not an absolute requirement, but if we can not get access to the cameras when there are adjustments to be made then someone at your local network would have to do that for us.

See that extension cord in the picture on the left? Unplug that and the entire camera network shuts down and disappears without affecting your primary network. Plug it back in and the system will boot up and start sending images again.

What will this do to our limited bandwidth?

Your bandwidth use stays the same no matter how many viewers are seeing your camera's pictures, because they're watching the images on the web server. One camera, uploading a new image every minute from dawn to dusk, consumes less than 20MB of traffic per day during the longest days of the summer. That can be reduced further by less frequent image updates. High Definition images consume more bandwidth. We track the camera's use and balance the bandwidth use for you.

If you have the available bandwidth, a camera can send a video stream to our streaming server which will make it available to the world. Alternatively, the multicasting protocol allows you to send one stream to your ISP which can be viewed by multiple viewers. Sonic.net supports multicast video over any DSL line.